Michael D’ Andrea “The Wolf” has been ousted as CIA’s CTC Chief, he has been replaced by “Chris” 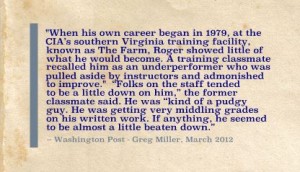